Both free and enslaved blacks arrived since early on The first person of African descent known to have arrived in La Española in modern times was a Juan Moreno or Juan Prieto (John the Black), a free –by all indications—young Black man who accompanied Columbus as a servant in the 1492 and 1493 expeditions (see Manuscript No. 003) and years later, after Columbus passing and as a more mature man under the name Juan Portugués (John the Portuguese), engaged in the colonization of Central America.[1] During the two decades that followed there were cases of other free Blacks, of both sexes, who went across the Atlantic to La Española on their own will as free individuals, but most of the recorded cases that we know are of Blacks forcefully brought into the colony by Spaniards or other Europeans who wanted to use them either as laborers in mining activities in the search for gold or as domestic servants.

We know of no other direct evidence from the rest of the 1490s about the factual arrival of Blacks in La Española,[2] but there are indirect documental indications from 1497 that the Spaniards may already have been thinking of taking enslaved Blacks to work in La Española[3] (see Manuscript No. 001). A local oral tradition of the residents of Santo Domingo City, first documented well into the 17th century, refers to a Black woman residing in the colony before the arrival of colonial governor Nicolás de Ovando’s colonizing expedition in 1502 who was remembered for her medical healing and caregiving services, provided to the dwellers of the early village from her own hut (see Manuscript No. 060).

On the other hand, there is a record from 1499 showing that by then, the Spanish Crown was also contemplating the possibility that enslaved or enslavable Black people might exist who could be residents of some of the territories across the Atlantic being explored by other sailors besides Christopher Columbus that were also being encouraged or supported by the Crown to do so. In the text of a capitulación or agreement with sailor Vicente Yañez Pinzón of June 6, 1499, the officials issuing the document to Yañez on behalf of the Spanish monarchs mentioned the things this explorer might find and be allowed to seize in the territories to be visited, indicating that "we also grant you any type of Black or dark slaves or other of the ones considered slaves in Spain and for whom there is reason to be slaves." [4]. A similar item was included in a few more capitulaciones of 1500 and 1501 between the Spanish Crown and other sailor-explorers. But soon the provision allowing the capture and enslaving of the found people was dropped from the agreements, possibly as it became clear that all the new peoples the Spanish or Spanish-sponsored explorers were coming across had not previously encountered Europeans and did not necessarily fit their preconceived notions of enslavability. [5]

The first two recorded cases of Black persons traveling to La Española after 1493 that we know of are those of two free Black men hired in Seville in 1501 by two different employers to do work as salaried workers in La Española. The first, named Pedro, had previously been the servant of a merchant, and at an undetermined date that year, was hired under contract by a resident in Seville. The contract covered his traveling to La Española on a vessel that was about to leave, and serving his employer as a worker for two years digging for gold or doing whatever was required in exchange for a salary of 6,000 maravedis per year, food and shelter “in accordance to what other workers are given in the said island” plus a twentieth of all the gold extracted, all to be paid every four months, the food to be paid for from the day the ship left.[6] (see Manuscript No. 068). The second was an Andrés García, hired on October 13th to travel to La Española and work there for four years for a salary of 8,000 maravedís per year, his travel fare also covered by his employer.[7]

By the summer of 1501 there is firm evidence that the Spanish monarchs were already considering using the labor of enslaved Blacks in the colonization of La Española, as seen in the instructions issued by the Catholic Kings on September 16th of that year to newly appointed Governor of La Española Nicolás de Ovando before he was dispatched to the colony. Item 21 of these instructions orders Ovando to prevent the arrival in the Indies of non-Christians, but to allow Black as well as non-Black slaves that had been born under the power of Christians (“you will not allow or cause to go there either Moors or Jews or heretics or reconciled ones or persons newly converted to our faith except if they were Black slaves or other slaves who had been born under the power of Christians [who are] our subjects and natives”). [8] (see Manuscript No. 005) 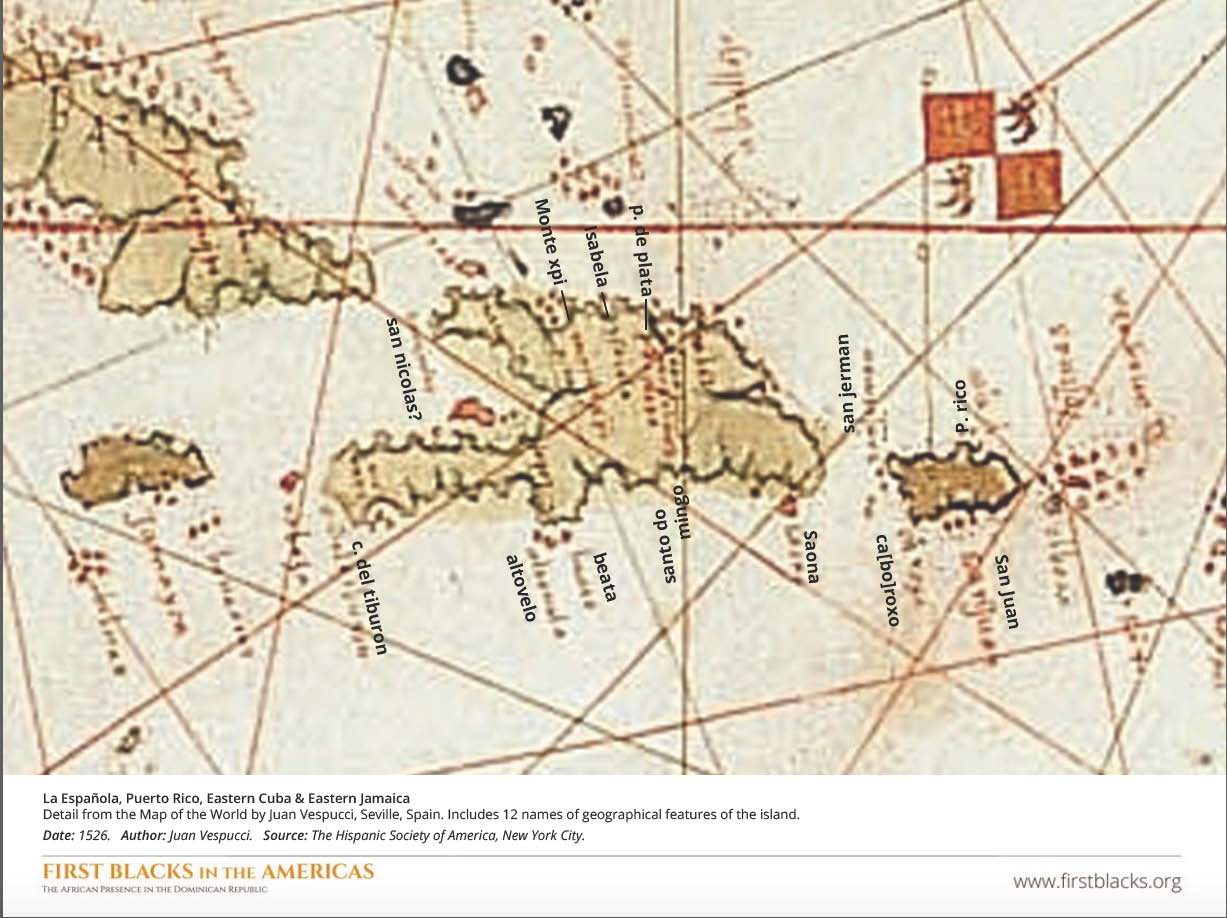 The concern for preventing the arrival of non-Christians into La Española had already been conveyed by the Crown shortly before in an agreement of September 5th of 1501 with a Luis de Arriaga who was at the time preparing a colonizing expedition to La Española. And it would be reiterated in another order to Ovando of February 15th of 1502.[9] As to the explicit reference in the documents to “Black slaves” as acceptable inhabitants of the new colony, it seems to show the possible inception already at this early stage of a racialization process in which the image of Black people began to be associated with the status of enslavement at least in the minds of some in the Spanish royal elite.

A similar clause was included in some additional capitulaciones of 1500 and 1501 between the Spanish Crown and other sailors-explorers. But soon the authorizing of the capture and enslavement of the peoples found  was dropped from these contracts-agreements, possibly as it became more and more evident that all the peoples that the Spanish explorers or those supported by the Spanish Crown were coming in contact with were unknown to the Europeans and did not necessarily represent the conditions that in the eyes of Europeans would render them enslavable.

[2] In the last decade archaeologists have begun to take a closer look at the first known remains of a post-Columbian quasi-urban European settlement in the Americas, La Isabela, in the northern coastal region of today’s Dominican Republic, founded by Columbus and his companions during his second visit to La Española in 1493. Some of the human skeletons found at the site have been initially identified as belonging to Africans.

[3] A Real Cédula of 1497 mentions a request that settlers of La Española had already presented by then to the Crown, asking for access to land in order to set up sugar mills, an endeavor that at the time was known to involve using enslaved Black labor force, as was already done in the Madeira Islands and Canary Islands.

[5]  Demetrio Ramos, La explotación del éxito colombino con el sistema de viajes de “descubrimiento y rescate”. Madrid: Testimonio Compañía Editorial, 1992. Capitulación con Vicente Yáñez Pinzón, June 6, 1499. Capitulación issued to Alonso Véles de Mendoza, June 5, 1500 and addendum of July 20, 1500. Also capitulación issued to Rodrigo de Bastidas on June 5 as well. The permission to enslave people in the territories to be explored, was, however, subjected to a restriction, in the form of a requirement of prior approval by the Crown, in a capitulación or agreement with explorer Alonso de Ojeda on June 8, 1501. In another agreement issued to Vicente Yañez Pinzón on September 5, 1501, the possibility of capturing people as slaves in the lands explored is explicitly mentioned.